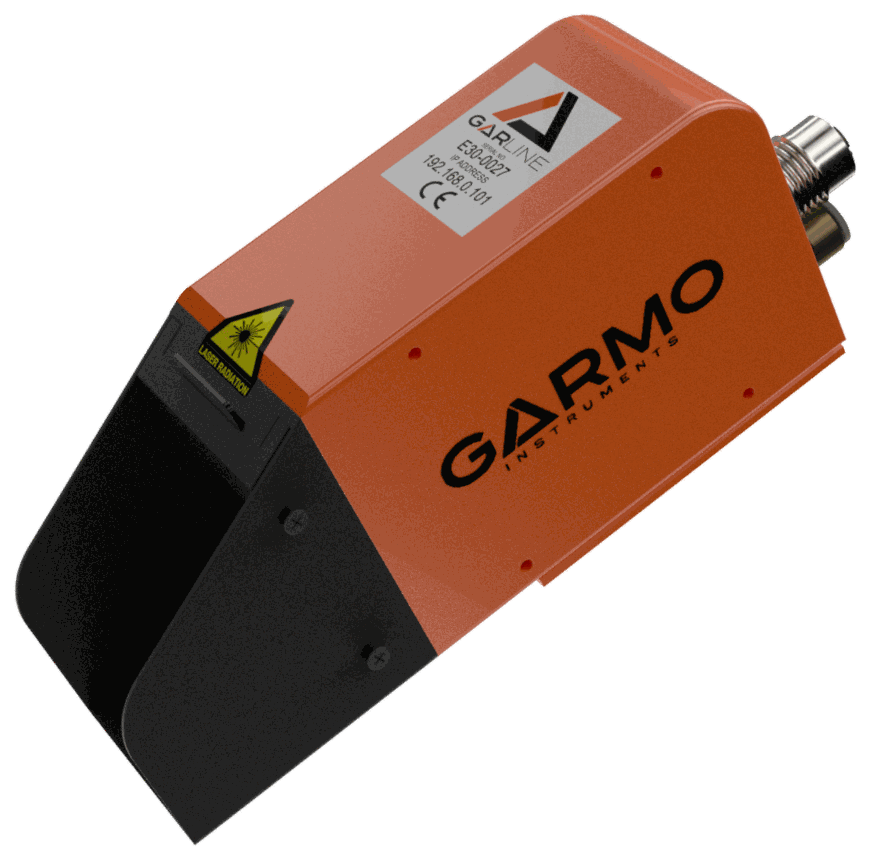 In a world full of more or less the same sensors, our aim is to conceive fresh and brand-new ideas, instead of new products only. Useful, robust, and functional, yet technically advanced sensors for automated welding.

The key is to make it all easier. When the good things come simple, they’re received way much better. That’s why the new GarLine seam tracking laser sensors are practical, tough and affordable. 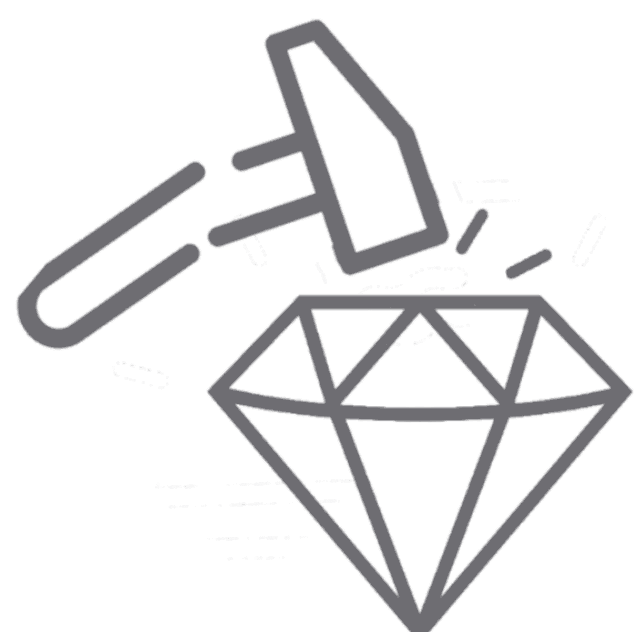 Its original design incorporates materials for aerospace use that ensure an optimal EMI insulation, including TIG welding processes. 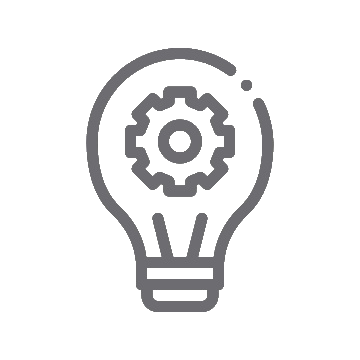 Its electronics of 4 parallel processes of 4Gb of RAM computes the corrections at 42 images per second in full resolution. 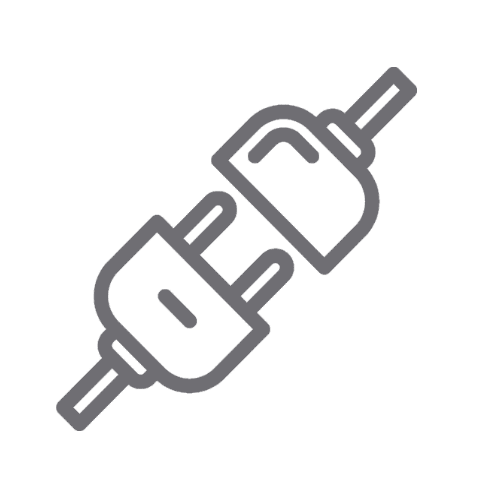 What makes GarLine sensors different is the inclusion of a connection system adapted to the new IoT technology.

The sensor supports most of TCP/IP protocols, and the web interface eliminates the need of specific software. 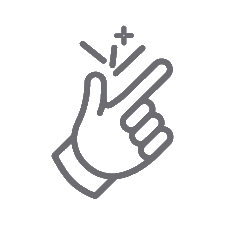 The new GarLine sensors are designed to offer easy integration, to both PLCs and Cobots.

For the first time, only one wire is required for a complete integration. No more computers, nor other devices needed. Just a POE switch injector.

GarLine C - The pioneer of a new stage

Dreams tend to be just fantasies. Still, if we’re ready to break the rules and adopt a different point of view, these dreams may come true if we’re willing to try it over and over again.

This is why GarLine C is the first seam tracking laser sensor for welding combining a vigorous and user-friendly design, with highest quality materials and leading-edge technology at the best price.

GarLine C helps large and small companies to reach the automation, since the sensor is a safe and efficient device for any industrial environment, whilst overcoming all kind of common integration, cost and maintenance barriers.

The use of cobot combined with a seam tracking sensor improves the quality of welding and welded products. Plus, not only the sensor ensures a successful seam tracking, but also an outstanding seam quality.

A cobot use combined with a seam tracking sensor uplifts the welding process and increase in flexibility and efficiency. Besides, this combination of cobot and sensor reduces waste and performance repeating, and significantly improves productivity.

Robot tracing through a seam tracking sensor increases safety at the working environment and eases the working process thanks to an affordable, assisted and simpler programming.

The cobot welding combined with the sensor allows total portability in the workshop, without a need for clamping and support elements to be related to the cobot. 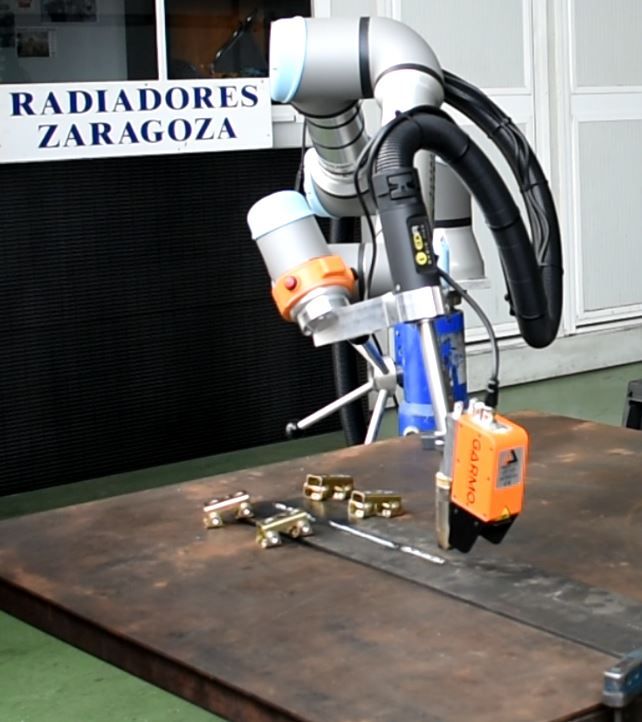 GarLine PLC - Designed to be unique

Sometimes we come up with ideas that at first sight may seem inconceivable for the world as we know it.

To face this situation, we’ve turned over the first rule for industrial production. Instead of producing for the design, we design for the production. That’s the only way to get ideas in harmony with reality.

GarLine PLC is basically the ultimate representation of top quality and unsurpassed functionality.

The sensor is designed to ensure dealing with adverse working conditions, such as humidity, corrosion or welding splatters. The sensor is resistant to magnetic fields and its outer casing withstands impacts and hard blows.

Direct connection to PLC, without any need for additional computer nor other devices. The sensor offers seam tracking, seam finding and a wide range of configuration options. The sensor includes customizable zigzag welding setup and provides integration examples which include HMI and communication libraries.

The sensor can be easily installed on both new and already existing welding machines. In addition, the use of a single standard wire (for power and data) makes sensor mounting easier and provides a universal connection. 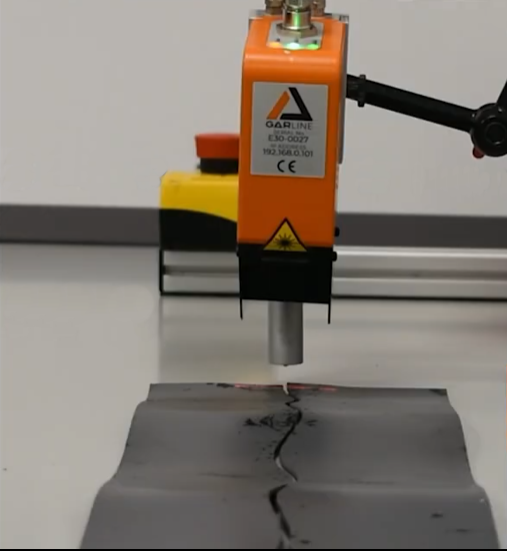 Which seams can GarLine sensor detect?

GarLine is designed to distinguish the most common welding seams. Thanks to its integrated web interface, seams can be easily detected and set up. Here are some of the seams that GarLine sensor detects: 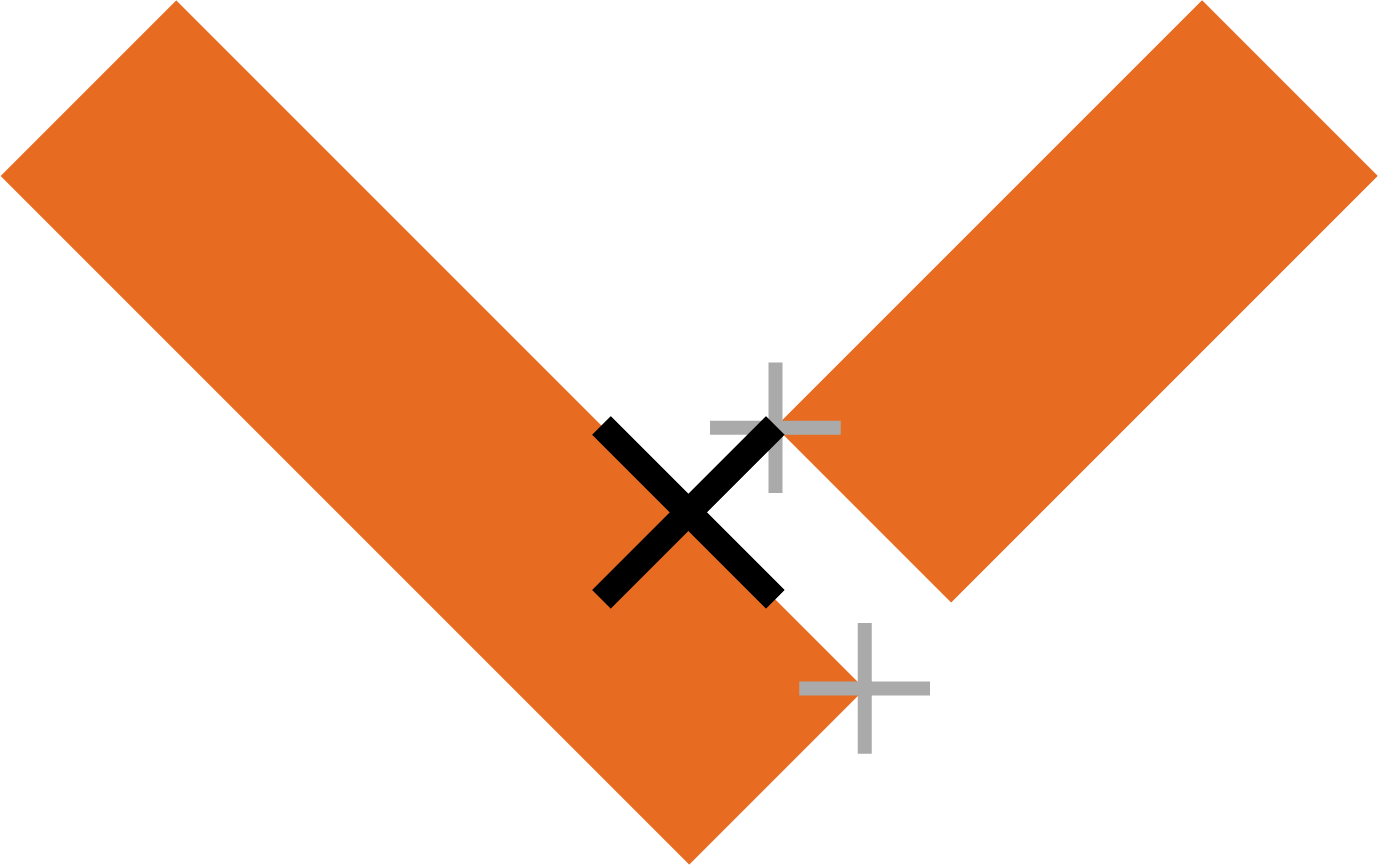 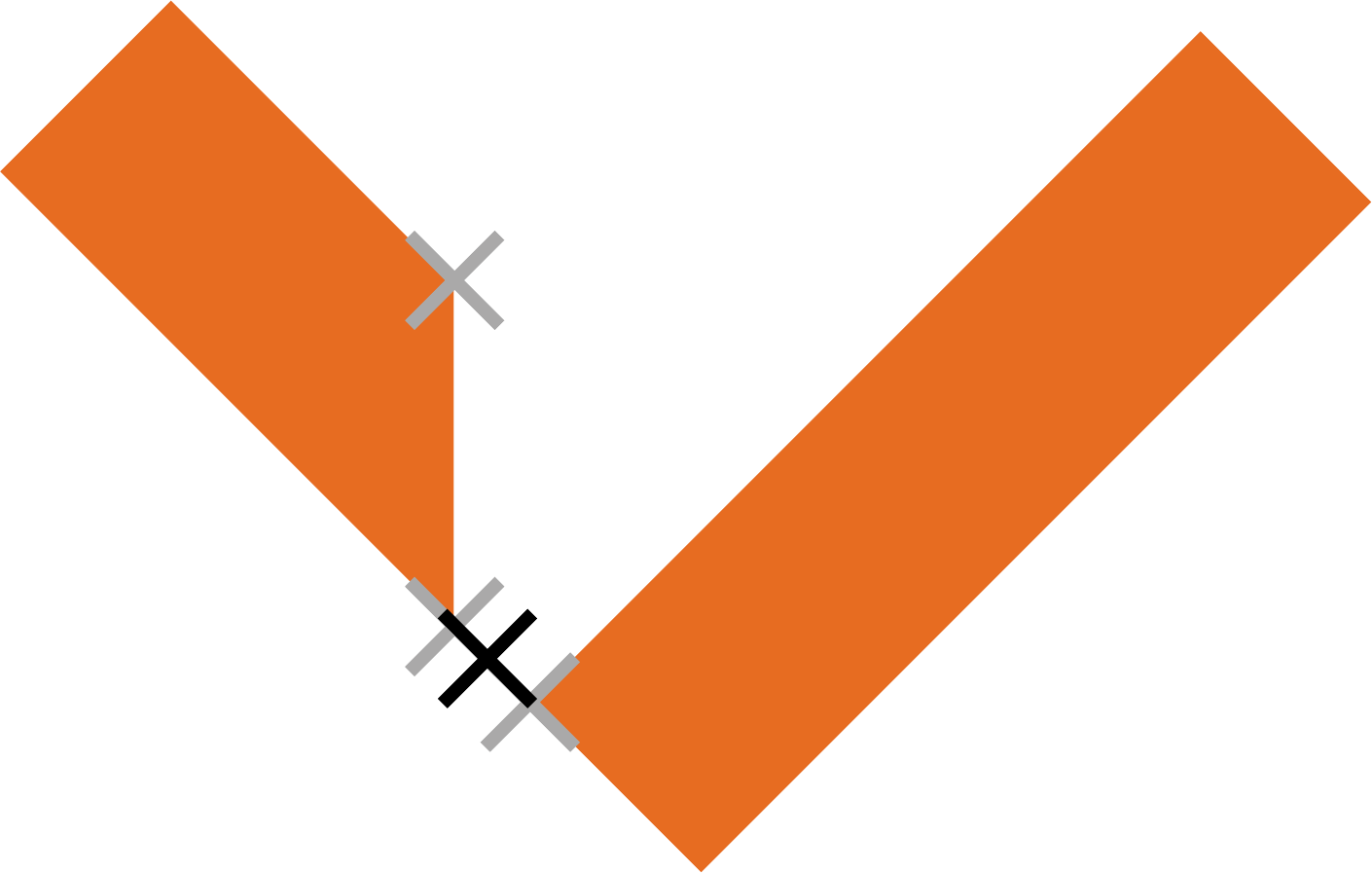 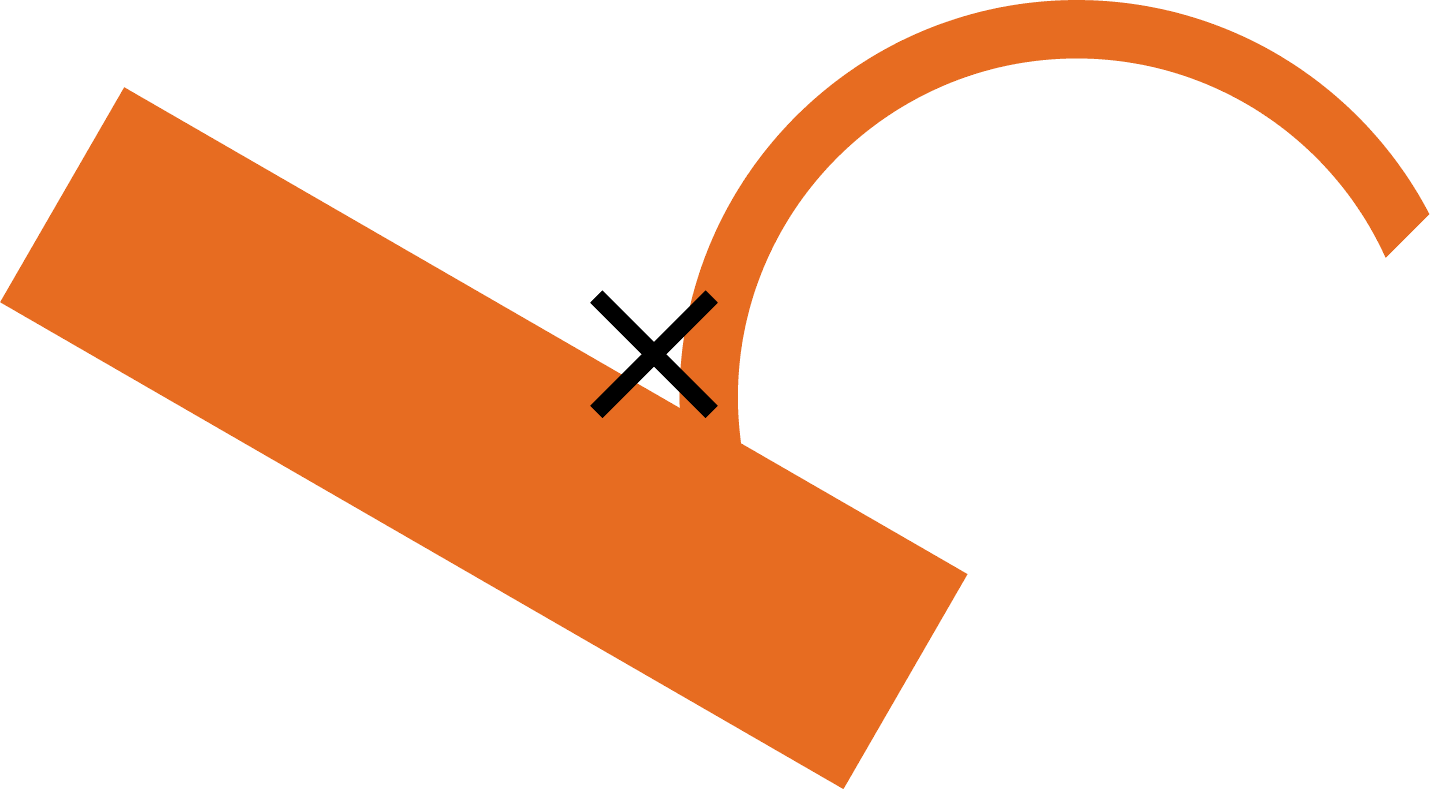 How does the laser triangulation process work? 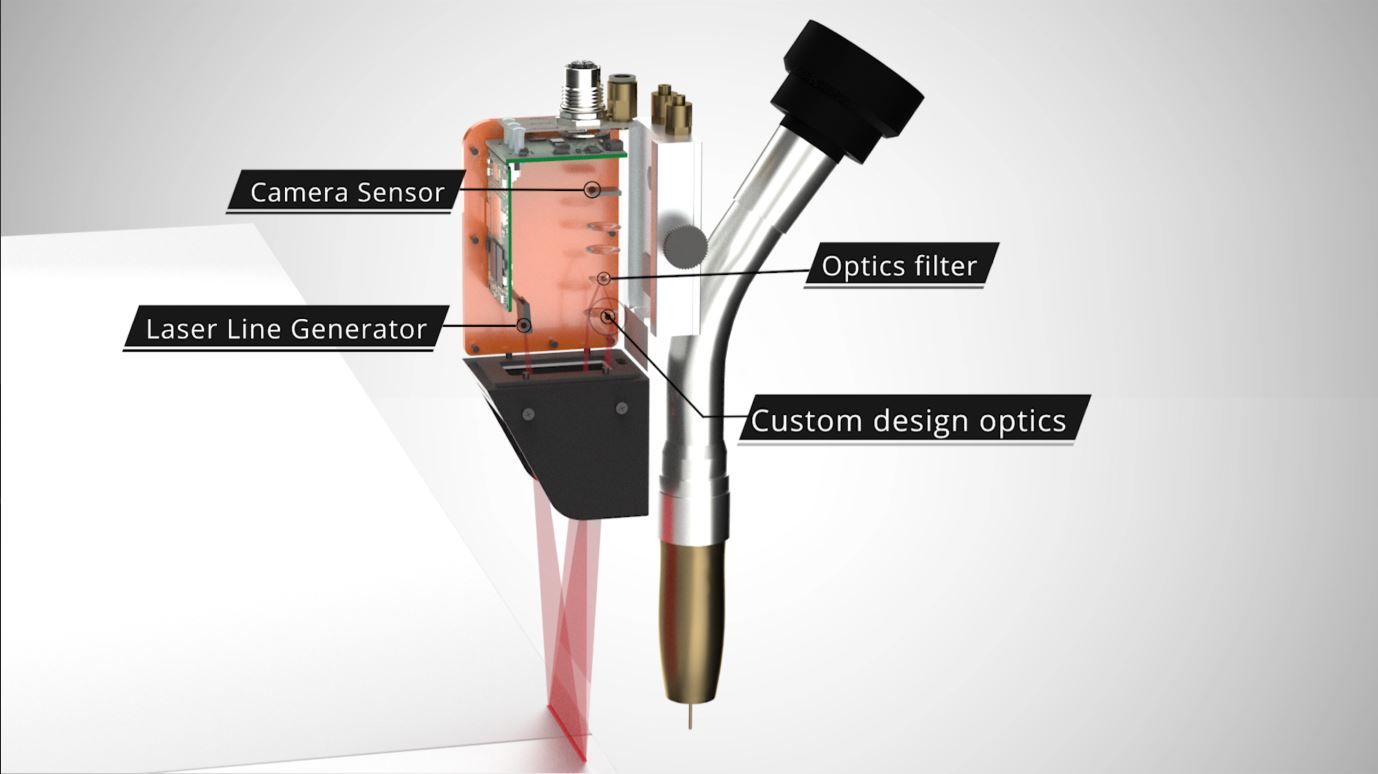 Laser seam tracking is based on the principle of triangulation, as shown in the picture. Triangulation is a way of extracting geometrical information from measurements and has many applications. GarLine uses a structured light source (generated by a laser diode) in conjunction with an imaging device to produce a series of 2D slices through the weld joint and combine these slices to generate them into a 3D information.

The sensor projects a laser stripe across the welding joint. The stripe is then deformed by the shape of the joint. An optical filter, incorporated within the sensor, perceives only the light, which is at the same wavelength as the laser, projecting it into the 2D camera (in other words, the filter cleanses any light except for the one projected by the laser). Once the sensor perceives the seam shape, the internal electric circuit processes the image and spots the welding key points.

GarLine sensor incorporates advanced electronics that enables the adaptation of the parameters of laser power and camera gain, to adapt to the color variations of the materials. Since these electronics are incorporated within the sensor, the adaptation between frames is made at 42 images per second speed.

How can I incorporate GarLine into my system?

GarLine includes a series of welding seam libraries and examples that don't require a professional programmer for integration, basic notions of PLC programming are enough to successfully incorporate GarLine into the system. These libraries include PLC integration sections and examples of the integration into HMI.

In case of integration into cobots, Garmo Instruments offers a URcap integration to enable a fast implementation.

Which maintenance does GarLine require?

GarLine is designed to offer user a minimal sensor maintenance. Thanks to sensor's polycarbonate frontal disposable protective window, its splatter shield, the air flow through the sensor head and its easy mounting and dismounting system on the water-cooled mounting plate, GarLine sensor is protected against any possible damages that could be produced by welding process (moisture, splatter, dust, etc.). Sensor maintenance is simple - depending on the welding process, the protective polycarbonate window would be replaced more or less regularly (the window replacement process is quick and easy). For a more in-depth cleansing, the sensor can be easily removed from the mounting plate, without any need in additional tools, and the external sensor housing can be easily cleaned. Thanks to the IP67 protection, the Gorilla Glass internal protective window and sensor's waterproof coating, GarLine's cleansing and maintenance are made simple.

What kind of laser does GarLine use?

GarLine employs a 3R class laser which is equipped with advanced technology and operates at a lower frequency than other laser sensors, that use a 3B class laser. What differs a 3R laser is the security that it offers at the workplace since, unlike other sensors, GarLine’s laser isn’t harmful to eyesight, even if the sensor is handled without protective glasses.

Power over Ethernet (PoE) is a technology that enables network cables to carry electrical energy.

A regular sensor normally needs two wires: a power wire and a network wire to connect sensor to the system. It’s usual to find these wires joined into a single non-standard wire with specific connectors.

Nevertheless, if the sensor can support PoE, just one standard wire is required, usually a Cat6e wire type or higher, since both power and connection data would be transferred through it.